Friday 10th February was a very special day in the history of Coláiste Chríost Rí as Professor Pat O’Shea, newly-appointed President of UCC, returned to his alma mater for a tumultuous homecoming. On an afternoon of great celebration, the entire school community gathered in the sports hall to hear Professor O’Shea speak in glowing terms not only of the academic grounding he received at Críost Rí but also of the rounded education he received there. Clearly, the future President was a talented young man as, along with the academic awards he received, he was also a member of an All-Ireland cross-county winning team. Master of ceremonies on the day was Deputy Principal, Mr Daithi Ó hAodha, and among the speakers were Brother Patrick who led the school in an opening reflection and Mr Michael Carey, school Principal, who, in a heartfelt and generous tribute to Professor O’Shea, spoke of the President’s place in  Críost Rí’s proud history of high achievers. Also worthy of mention is the choir under the direction of Mr White who entertained the school’s VIP guest to a medley of mostly Cork-themed songs. The celebration was followed by a reception in the old hall attended by staff – past and present – and a large number of invited guests. 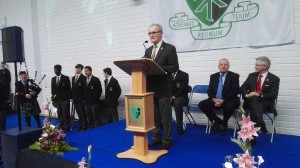 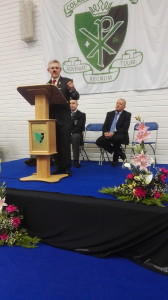 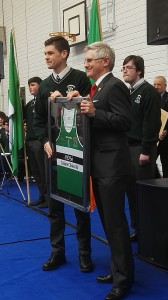 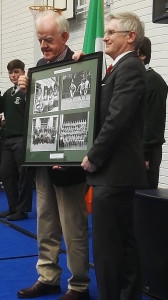