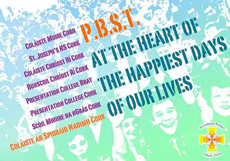 The official blessing of the new Presentation College Bray building was performed by Archbishop Diarmuid Martin, Archbishop of Dublin on Monday the 8th of December. The moving ceremony was...read more →

Many events have been organised to commemorate this special occasion including a Mass on the Feast of the Presentation in the Lough Church at 11:00am on November 21st....read more →

.     The celebratory year began with a Mass held in the Church of the Descent of the Holy Spirit, Dennehy’s Cross on 8th October. The Mass was...read more →

Greenmount Pupils Perform for the President!

On October 13th, 3 current pupils and 5 past pupils from Greenmount National School played in the National Concert Hall as part of the Barrack Street Youth Band, conducted...read more →

A staff seminar entitled ‘Pres Spirit – The Difference’ is being held in each PBST school.   It is now five years since PBST was established and the purpose...read more →

The Board of Directors of Presentation Brothers Schools Trust would like to wish each of their schools – Management, Staff and Students – every success in the coming academic...read more →

Congratulations to Principal and staff of Scoil Mhuire na nGrás, Greenmount on being awarded a “Digital School of Distinction Award” for the schools’ innovative and progressive...read more →